What started as a funny 2 minute rant on You Tube from an unknown shirtless teen turns into a question of equality and respect regarding money that Thai's rarely talk about. Thai's aren't shy about discussing money especially asking about how much money someone makes or what assets they have. Thai's are also very open about asking for money too which can be a bit shocking for newbies in Thailand.

The kid in the video claims that he bought a case of Ichitan tea in order to win a car only to find out later that the promotion is over. The kid claims to have sores in his mouth because he had to drink so much to win the car. He also claims that his folks hocked in their car in order to buy enough cases of Ichitan to increase his chances of winning. (requires understanding of Laos).

So after this goes viral you can only guess what happens next. Mr Tan, the owner of the Ichitan brand posts a You Tube response to the boy and sends him a brand new Iphone!

Now while this was playing out I'm thinking to myself this kid was funny and entertaining, Mr Tan got some publicity out of it and the kid wasn't exactly asking for the phone he was just being funny with his mates so good on him. Then at the same time I'm thinking there's gonna be a whole bunch of people come out of nowhere and start asking Mr Tan for money.

Of course within 24 hours there were dozens of desperate kids to adults with there own YouTube begging channel one such video gained the most attention and not in a good way....they didn't ask for a phone they asked for 3 million baht! The money was for a school band to play in a competition overseas.

Mr Tan saw the video and took the opportunity to go to the school and give them the money they needed. What he didn't know is they were going to a competition where they were already set to win cause they have no opponents, which is why the government denied them the request in the first place! Now they are asking for another 4 million baht so they can go to America after and compete there...again...against themselves.

The whole thing is ridiculous really (This video with subtitles)

Mr Tan was fairly well known before all this started playing out but now you wouldn't find many people who didn't know who he was. And what a character too! Check this video out where he gives away a brand new Porshe to some girls at the mall, these girls asked Mr Tan if they can just sell the car cause they don't know how to drive it lol. Yet most importantly check out Mr Tan and how he dresses up like some sort of superhero really the guy is a show.

Mr Tan is everywhere too, just stand at the lights across from Maya you'll see the little fat man statue with his signature captains hat. What he's a captain of I don't know, but he is wearing a costume similar to superman giving away cars and bundles of cash not much you can hate on the guy. Gotta give him props, my girlfriend has bought 40 bottles since the kid got his Iphone. 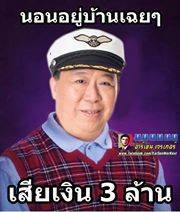 Chris founded LivingThai.org in 2011 and has received over 3 million visitors. He has lived here for over 10 years and speaks reads and writes very good Thai.
View all posts by Chris →
Renting in Thailand
Who stole my shoes on Koh Chang island Thailand?

One Response to Cyber-begging in Thailand