I think a lot of guys could learn something from Thai girls because a lot of girls that I've met especially the working girls have balls of steel! The bleeding hearts might tell you I'm a cheap bastard cause all I wanna buy the girls is a bowl of noodles but those same guys probably don't know most of those girls have the balls to ask for anything including but not limited to iPhones laptops, tablet computers and scooters.

Just today I had this Karaoke girl come over to my place she arrives we go have some lunch just some Kaow Soi delicious actually even she said come back sleep fool around usual story then she says she has to go and asks me for money for dinner. Well I'm actually feeling generous today and give her 100 baht. Might as well just given the slag 1 baht because she turns around and says "is this it?". Well we just went and had lunch together couple sodas cost me 101 baht what are you going to have for dinner? Sushi? Come on!

Actually the story goes further than that because this girl is telling me earlier that her phone is broken she types in ก and it comes out ค. So apparently she can't use her Facebook. Boo hoo you guys know me I can barely send a text message with my phone it's not really a priority so you think I give two hoots that you can't access your Facebook! Actually I give her an opportunity to access her facebook on my computer, she says she can't remember her password or login details, so full of BS!

But this girl isn't asking me to buy her a phone she wants me to buy her a tablet, apparently she knows someone who is selling their second hand tablet for 4000 baht and even suggests she'll pay for half of it. Do I look like the gadget man why don't you save and buy it yourself. Oh because she has to send money home they are building a house in Fang province. I honestly don't care bitch and maybe you should look at your priorities and not spend the bloody 4000 baht on a tablet computer isn't going to get your house built any faster. 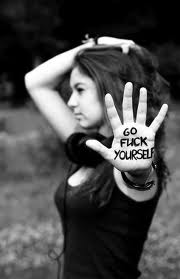 Now this chick is going on and on and on about her stupid tablet but never once mentions she wants to use it to connect with me but you know I'm old hat to all this crap and I've never once bought an electronic device for anyone it'd take a big event for me to even upgrade my phone! Now after asking me for the 20th time to have me buy her laptop I said yeah no problem we'll go tomorrow. Now before some of you get all pissy that I lied to her this is Thailand and since I'm living Thai if I said outright no fuck off that would be considered rude, but say OK and flaking is considered acceptable in Thai culture.

But like how this story started out after agreeing to buy her the laptop she hits me up for lunch money get's pissy cause it's only 100 baht then calls me a cheap bastard.

Man these Thai chicks have balls!

Chris founded LivingThai.org in 2011 and has received over 3 million visitors. He has lived here for over 10 years and speaks reads and writes very good Thai.
View all posts by Chris →
Nightclubbing in Bangkok
Gangnam Style Thailand

11 Responses to Thai girls have balls