The US National debt is out of control. In the following images of US 100 dollar bills stacked in different amounts, you'll see exactly what the US debt actually looks like if you were to stack the 100 dollar bills upon one another. The images are frightening, you've been warned.

100 US Dollars
The most counterfeited bank note in the world!

Ten Thousand Dollars
Enough money for a really good vacation to Thailand! If you budget correctly it's enough money to live in Thailand for an entire year! 1 Million US dollars
Everyone dreams of getting a million dollars. One million USD can change someones life. Still it is not within reach for most, most people have to work 92 years to even earn that much money. 100 Million Dollars
Plenty of money for everyone! Still there are over a million people in the world with this much money. 1 Billion US Dollars
Now we're getting serious! You'll need some serious help if you think you can rob a bank for this much.

One Trillion Dollars
Not a single person in the world that has this much money for themselves, and if they cashed out there probably isn't even a bank that could. Besides, where would you keep it, it's the size of a grid iron field! 15 Trillion Dollars
Unless the US government can do something about it's budget, this is the amount the US will be in debt by Christmas 2011. Statue of Liberty seems rather worried as United States national debt passes 20% of the entire world's combined GDP (Gross Domestic Product).
In 2011 the National Debt will exceed 100% of GDP, and venture into the 100%+ debt-to-GDP ratio that the European PIIGS have (bankrupting nations). 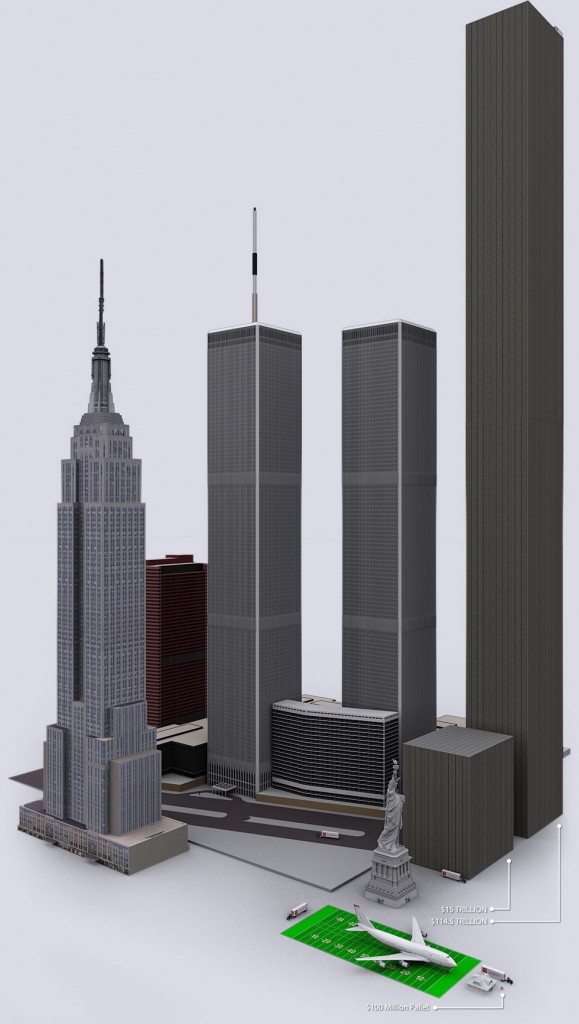 115 Trillion Dollars
$114,500,000,000,000. - US unfunded liabilities
To the right you can see the pillar of cold hard $100 bills that dwarfs the
WTC & Empire State Building - both at one point world's tallest buildings.
If you look carefully you can see the Statue of Liberty.

The 114.5 Trillion dollar super-skyscraper is the amount of money the U.S. Government
knows it does not have to fully fund the Medicare, Medicare Prescription Drug Program,
Social Security, Military and civil servant pensions. It is the money USA knows it will not
have to pay all its bills.
If you live in USA this is also your personal credit card bill; you are responsible along with
everyone else to pay this back. The citizens of USA created the U.S. Government to serve
them, this is what the U.S. Government has done while serving The People.

The unfunded liability is calculated on current tax and funding inputs, and future demographic shifts in US Population.

Note: On the above 115T image the size of the base of the money pile is half a trillion, not 1T as on 15T image.
The height is double. This was done to reflect the base of Empire State and WTC more closely.

Source: Federal Reserve & www.USdebtclock.org - visit it to see the debt in real time and get a better grasp of this amazing number.

Chris founded LivingThai.org in 2011 and has received over 3 million visitors. He has lived here for over 10 years and speaks reads and writes very good Thai.
View all posts by Chris →
45 year old Thai man rapes his 9 year old daughter
Census – Populations for cities in Thailand